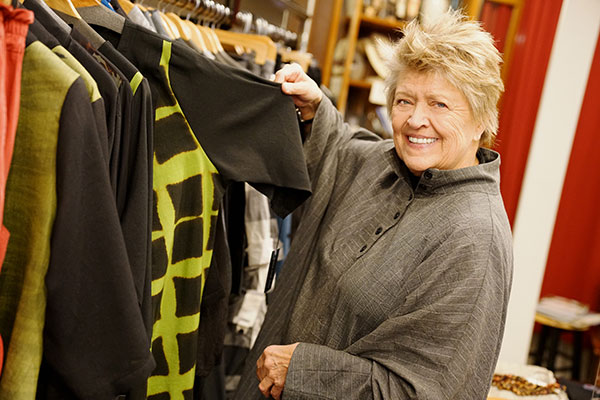 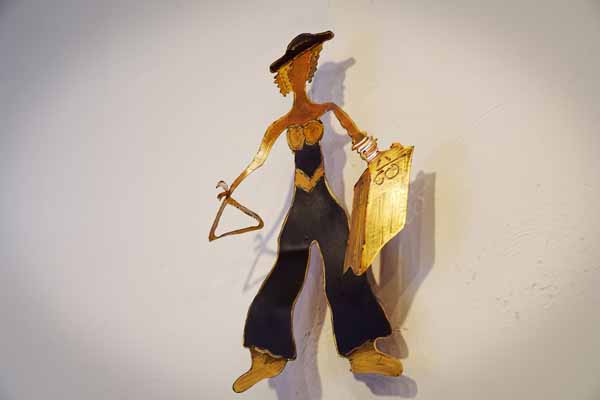 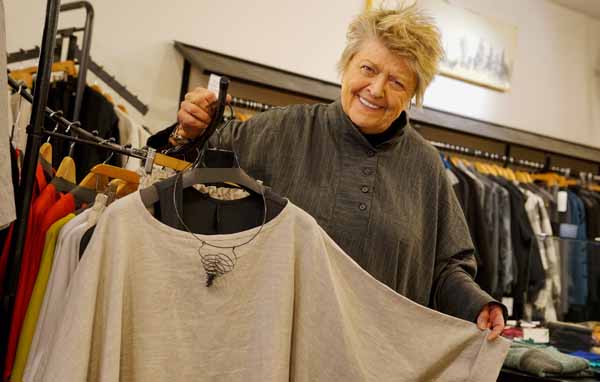 Much like the clothing she carries, Harriet Gibson is unabashedly direct, while being comforting and forgiving at the same time. As the owner of her namesake women’s boutique, Harriet’s, she knows exactly who her clothes are targeting and why. Here, we discuss “lifestyle dressing,” wardrobe mistakes made by older women, owning a small business and more.

We’re here to talk fashion, but can we begin with you telling me about the piece of art on the wall over there…the woman made out of metal?
Harriet: I’m a Denver native. I was born at St. Anthony’s hospital. My first job out of college was in Cherry Creek North, over on First and University. I worked in the computer industry for close to 20 years. I lived in San Francisco for a while, but was working so much that I didn’t have time to have fun. So, I decided to open my own store, and then I moved my store to Denver because I wanted to be near my grandson. That image was created after I had told a friend that I was finally going to do it…I was going to open my store in Denver. I had just rented this very spot on Third Avenue. He sent me a drawing in an email and it was that image…that woman. He just said, “That’s your logo. That’s you shopping.”

Why did you choose this location for your store when you moved back from San Francisco?
Harriet: I knew that was the only place my store would fit in with what I was doing. A lot of the other little neighborhoods seemed like they were more for the younger, trendy people and I wanted a place where women in the 50+ age group could also feel comfortable.

What are women looking for when they come to your store?
Harriet: Listen, most women don't have perfect bodies. All of my clothes are artsy and loose, because our bodies shift. We can't wear the tight clothes and we shouldn't because we’ll look bigger in something that doesn't fit. I wanted my store to be a place to shop for stuff that's unusual and not stodgy just because it’s for older women. I’m about “lifestyle dressing.”

…And what is “lifestyle dressing?”
Harriet: It means you can look out of the box AND be comfortable AND be stylish AND have fun.

Tell us about what you’re wearing today…
Harriet: I’m wearing Kedem Sasson. He’s out of Israel. I love his line, and I sell it out almost every season. This top I’m wearing…you’d never believe this, but it’s ten years old. It’s not too trendy, it’s well-made. It’s my way of dressing.

What do you think this style of dressing says about a person?
Harriet: It says they are free-thinking. I have a lot of professors that shop here…but I have lawyers, too. I even have a couple judges.

What advice would you have for someone who is opening their own small business?
Harriet: I got a great piece of advice from Raz Gnat, the owner of GNAT down the street, when I was trying to decide which space I wanted. He said that even though I was in Cherry Creek North, I still needed to advertise. I still had to get out and network. I advertise a lot in the hotels, and that’s worked very well for me.

Your name is on the store. You are the brand. Is that a lot of pressure?
Harriet: Well, any small business owner has to really work their store. If you don’t, it won’t succeed. Some people think you can open a store and just stay small and not really have to work at it. I’m here seven days a week, but I love it. It’s me. I’ll be getting more help very soon, and I’ve also had interns work for me for credit.

You had actual fashion interns that worked for you for credit?
Harriet: Yes! They came through a program with Denver’s School of Science and Technology. They learned a ton…how to lay out patterns and figure out yardage, how to cut and sew, how to run a store, how to sell to customers, etc. They both graduated and went on to careers in fashion in New York.

My grandson who lives here also has a great eye for fashion, and he obviously grew up around all this. He’s 15 and he’s really in to “street clothes” that are not the run-of-the-mill.

Who knows, maybe one day you’ll carry your grandson’s designs. Do you carry any local designers right now?
Harriet: Yes! Steven Sells is local. He kept sending me post cards and finally I went to his showroom and I thought his pieces were just stunning. He shows all over and just did a runway show with Denver Fashion Week.