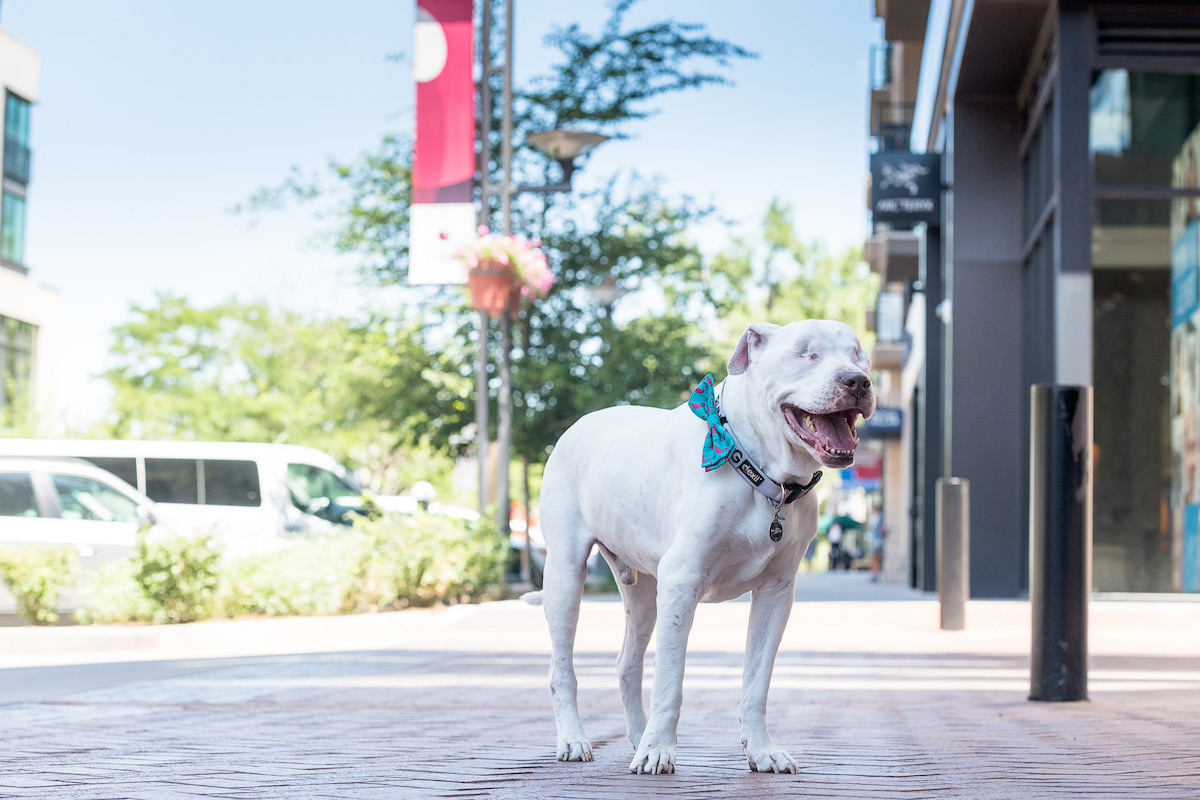 To meet Tim is to learn that happiness can look a little different to everyone.

It only takes a few minutes with this perfect gentleman (who sported a fancy flamingo Chuck & Don’s bowtie for his big debut) to realize that despite a ‘ruff’ start in life that led to the surgical removal of his eyes, he’s just like any other dog:

He has an insatiable passion for fluffy toys with squeakers.

He loves to go camping with his pet parents Nicole and Kenny and his three-legged canine sister Lexi.

And… well, not much else.

“Tim is a very mellow soul,” Nicole says. “He doesn’t really do much, but at the same time he has so much character.”

On Tim’s and Lexi’s Instagram account @tim_lexi_adventures, you’ll primarily find photos of him lounging, snoozing or some combination of the two. Whether it’s in a hammock, on a patio, in the car, or really anywhere, Tim’s true calling is to find the perfect nap spot. 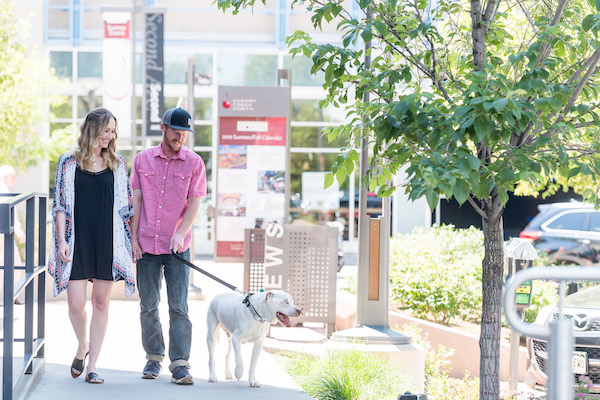 Nicole and Kenny love taking Tim and his doggie sister Lexi camping almost every weekend, where Tim's favorite activity is to snooze in a hammock.

Yes, that is all he does.

Nicole and Kenny aren’t exactly sure how old Tim is, because he was rescued three years ago from an abandoned building in California. The rescue group that found him hosted an online fundraiser to pay for the surgery, and that’s how Kenny discovered his new best friend.

“It’s funny, because Kenny was looking for a running dog, which is the complete opposite of what Tim is, but something just stood out to Kenny about his story.”

The couple moved to Denver from California just over a year ago for Kenny’s job, and they’ve fallen in love with how dog-friendly they’ve found the city to be with so many campsites that allow dogs and amenities to pamper every pup. They also love living in Wash Park and being so close to Cherry Creek North so they can regularly stop in Cherry Creek Grill, their favorite date night spot.

“We live right down the street and try to take Tim and his sister Lexi everywhere we go, as much as we can.”

Getting to know Tim can be a little tricky, as he tries to stay independent, Nicole says. He doesn’t like to be guided too much – he finds his way by using his paws to tap (or “prance,” as she likes to say) and gently bumps into walls to figure out where to go next.

“If you trust him, he will learn to trust you.”

Since dogs are part of the everyday experience in Cherry Creek North, the BID decided to get to know local pups and their owners a little better through hosting a social media contest in June to find the area’s “Top Dog” and give away more than $400 worth of prizes from contributing businesses. What we found is that Denverites not only love their dogs – they love sharing their doggie adventures on social media. 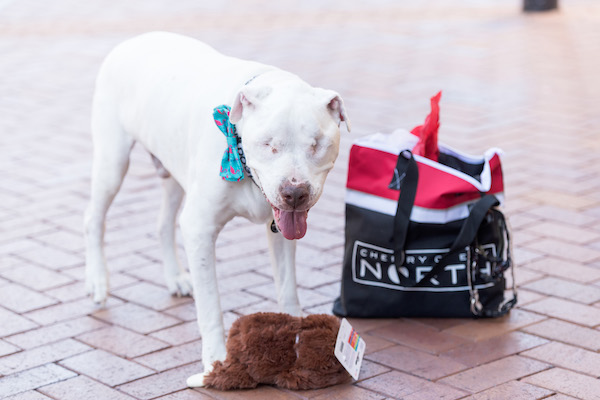 Tim and his new fluff toy are getting along just great.

Tim won the contest by more than 100 votes. Nicole credits this to their new friends in Denver, including their new veterinarian in Lakeside, and old friends and family back in California.

“The reason we started his Instagram was so people could keep up with him because he was so loved (in California),” she explains. “People are asking way more about how Tim is adapting to our recent move rather than how Kenny and I are liking Denver, but it’s great. People love the Instagram and really like keeping up with the life of Tim and checking in on him.”

But Nicole doesn’t want anyone to worry about her sweet boy.

“People are always like, it’s so sad he has no eyes, but he just hasn’t known any different and he is the happiest dog. I mean, just look at him, he is so happy! I bet he has eyes in his dreams. I mean, we have to believe that—you should see how animated his dreams are.”

Thank you to everyone who entered and voted during Cherry Creek North’s first-ever Top Dog Contest. Follow along with Tim and Lexi @tim_lexi_adventures and keep sharing your dog photos with us by tagging @CherryCreekNorth on Instagram and using #DogsOfCherryCreekNorth!

Thank you to the businesses that donated to the prize package: