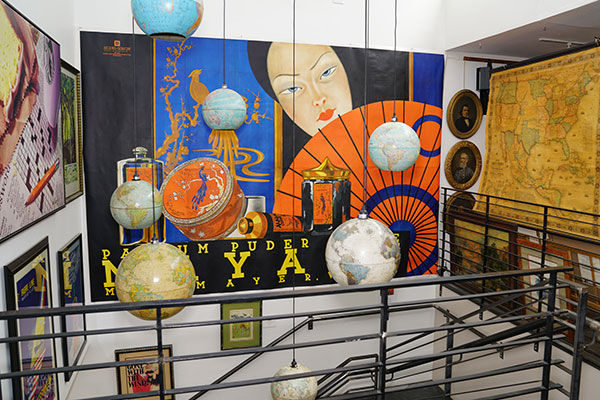 On the corner of 2nd and Fillmore is a funky two-story blue and yellow building. If you venture upstairs, you’ll soon find yourself in the city’s largest collection of vintage European posters. We browsed the stacks with the owner of Gallerie Rouge and Cherry Creek Framing, Lisa Tyler, who taught us the ins and outs of vintage poster appreciation and whimsy.

Tell us about the evolution of Gallerie Rouge and Cherry Creek Framing.
Lisa: This is my twenty-second year with the gallery, and I've been in four different locations in Cherry Creek North over the last fifteen years. I live in this neighborhood, and if there’s one thing I’ve learned about framing, it is that the business is very much based on the neighborhood you are in. At the beginning of this year, The Philadelphia Print Shop moved in to the other side of our space. Now this address is a one-stop shop for vintage paper.

Why did you start collecting vintage posters?
Lisa: I was a nurse for about twenty years, then I left nursing and started the poster business because it was an interest of mine. About eight years later I started the framing business. My husband and I are from Boston. There's a really great poster dealer in Boston and when we were just married, and we didn't have any money, we had so much fun just looking around their gallery. Then one day we bought a poster…and then eventually we bought another. These days, our house is basically a museum-level collection of posters.

What genre do you and your husband like to collect for your home?
Lisa: We tend to like the turn-of-the-century posters from the late 1800s through 1910. They were basically advertising posters. A lot advertise venues in Paris like the Ambassador's Club and other night clubs. Toulouse-Lautrec is from that period, so he produced a lot of posters for nightclubs and other venues.

Tell us about the massive poster with an Asian flair that hangs in your entryway…
Lisa: This is an Austrian poster from the 1920s. It’s eight separate sheets. Europeans in the 1900s were very enamored with the Far East and their culture, so this is a common theme you'll see. This particular poster is advertising cosmetics. You can't find this in a smaller version. It's only found in this size. This type of poster would have been on the side of a building, but this one was never hung, so it was never exposed to the elements.

Bicycles were another product that were frequently advertised on posters during this period of time…
Lisa: Yes! At the turn of the century, bicycles were being promoted as a liberating device for women, because they could hop on a bike and feel “free.” Cycles Aiglon made a beautiful poster of a women on a bike, being pulled by an eagle. The woman is dressed in a yellow body suit. She looks so modern. My husband actually has this poster hanging in his office at University Hospital. It’s really rare. I've only seen it twice in 22 years.

Over here, we have two more bicycle posters that I think are really incredible. This Dilecta cycling poster is from France. It’s very rare. It dates back to 1930. They used these very angular, deco style to show speed. I had my eyes peeled for this for a long time. It would look so perfect in a mid-century modern home.

And then we have this beautiful Pannetton poster. This is another brand of bike, but this poster is very different from the Dilecta. It’s more nouveau-style, as opposed to having the angular sort of representation of an art deco poster. It features a very voluptuous human female form. They used these goddess-type images in their advertising. A lot of times they were naked, but they could get away with that because they weren’t everyday people… they were goddesses… on bicycles.

So the juxtaposition of these two bicycle related posters is intentional?
Lisa: It definitely could create a real teaching moment for anyone who came in.

What is the education process like for the average person who walks in to browse Gallerie Rouge?
Lisa: Well, I always like to talk about how the posters were printed. The early ones were printed off lithographic stone. Just imagine these large pieces of stone the size of the poster. Then the artist, or the lithographer, would draw the image one color at a time and they were printed off the lithographic stone. I also like to teach people how to recognize posters from different periods, different countries and different artists. For someone new to posters, I like to say it takes three visits before they decide to buy.

Why do you think it takes three visits before most people decide to buy?
Lisa: The first time people come in they learn about the process and the history and they are intrigued. Then they come back, and they really start looking. Then they go home and really look at their space and they decide what would look good there.

What is the restoration process like for your posters?
Lisa: They are actually very fragile. I buy them as paper and a lot of the time they are crumbling. We send them out to the conservator and the linen-backer. They mount them on acid-free paper that's bonded to a linen which stabilizes them. Then we can show them without fear of ripping and it helps them lie flat for framing.

What determines the value of your posters?
Lisa: Poster pricing is really easy. It's like any antique. If it's really rare the price goes up. Some artists are very collected and their stuff is more expensive. The condition of the poster is also a factor. If it's in rough shape, even if it's been restored, it's value isn't as much as if it's in very good shape. Some posters are so rare that the condition will not impact the price as much.

You’re part of the International Vintage Posters Dealers Association. Why should your customers care about this designation?
Lisa: For the last eight years I was President of IVPDA and now I'm Vice President. We have 64 members throughout the world right now. Our major function is to assure that the people who are members only sell authentic posters.