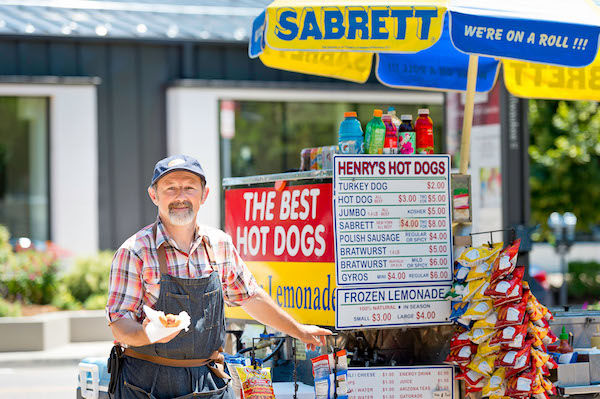 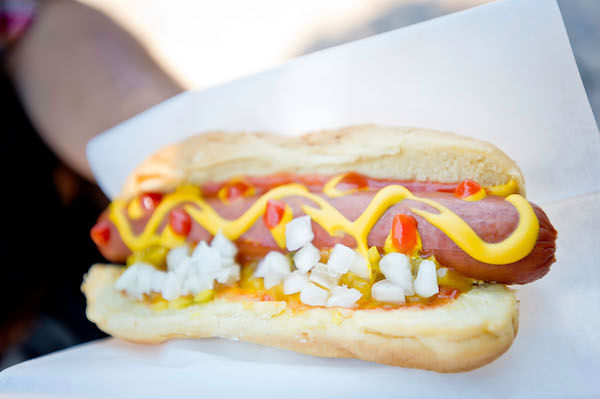 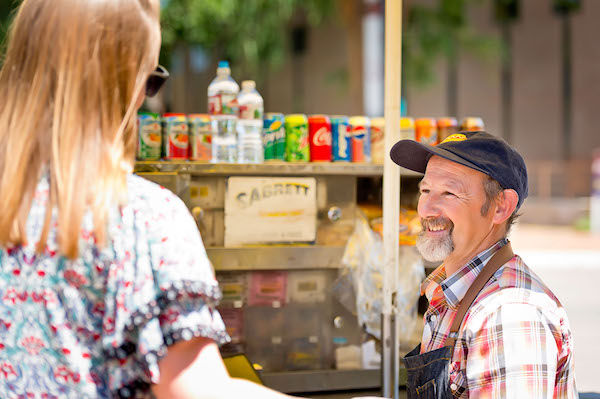 Ninety percent of Henry Rubinchik’s customers let him put the toppings on their hot dogs. “Some people like to do it themselves,” he chuckles. “But when I do it, no matter if you are young or old, this is how I do it. Let me show you.”

He grabs his tongs and goes to work, opening a steamy compartment inside his cart to retrieve a classic New York-style Sabrett hot dog and place it on a warm bun. Then, for the pièce de résistance: he draws a squiggle pattern with the ketchup bottle, with dots along the sides. He then repeats the design with the mustard and hands it to another happy customer, just as he’s done for the past 25 years.

You can find Rubinchik under his iconic blue and yellow Sabrett branded umbrella at the corner of Milwaukee Street and 3rd Avenue Monday through Saturday at lunchtime throughout the warmer months. In winter, he spends his time as a hockey referee – he says he’s not a fan of big smiles, since he lost part of his front tooth to an errant hockey puck. But anyone who’s visited his cart knows he’ll always offer a warm welcome.

Affectionately called “Henry the Hot Dog Man” by many (and unmistakable in his hot dog-emblazoned hat), he considers himself part of the Cherry Creek North community. Sometimes he acts as a self-described “info desk” for new visitors, other times a listening ear for regular customers who love to stop by and chat with him about everything from their jobs and families to politics and Rubinchik’s Russian heritage.

“People don’t just come for hot dogs very often,” he says. “They want to chat. Sometimes about my former country, maybe about their kids who have grown up and now they’re doing something good in New York or Washington. They want to talk about our country. Because I’m an immigrant, I see some stuff differently than other guys. I’ve got my opinion, they’ve got their own opinion. We never fight!”

Rubinchik got started in the hot dog business right after he came to the United States. His cousin offered him a job with the hot dog cart, which he eventually bought. Running the business has helped him integrate into the local culture.

“Many years ago, when I started helping my cousin, I didn’t speak English,” he says. “No English at all. So basically, people want to talk to me, they want to know about me and know about my hot dogs. So, I have to start talking to them! That’s how I learned English.”

Year after year, those same customers continue to return. “Kids became older. They would bring their girlfriends and boyfriends. Then, I start to see kids bringing their own kids, so that makes me feel old.”

But he laughs off any reference to his status as a Cherry Creek institution.

“Probably, but I’m enjoying what I’m doing,” he says. “Otherwise I would have closed a long time ago.”

Over the years, Rubinchik has watched the one and two-story buildings climb higher around him. But what’s remained the same is the sense of community: You can’t talk to him for more than a few minutes without hearing a friendly honk from a passing car or watching him greet another regular customer with his or her regular order, which Rubinchik typically has memorized.

“I like all the people. I like that Cherry Creek is a popular place to be. As much as it’s changing... it’s still going to have its charm. It’s got nice green space and still the same people, same community.”

Rubinchik never advertises and is “trying to stay away from Facebook,” as he says he’s a very private person. But through word of mouth, he regularly books private parties and events.

His own family can’t even figure out the magic behind his cart and its inimitable power to turn a hot dog into something spectacular.

“Even my family stops by for Sabretts,” he says. “For some reason, if it’s made out of my hot dog cart, they taste different. It’s much tastier than when we make them at home. Same hot dogs! But my family prefers to come to my hot dog stand to eat hot dogs because when I bring them home, it’s a totally different taste. I don’t know why.”