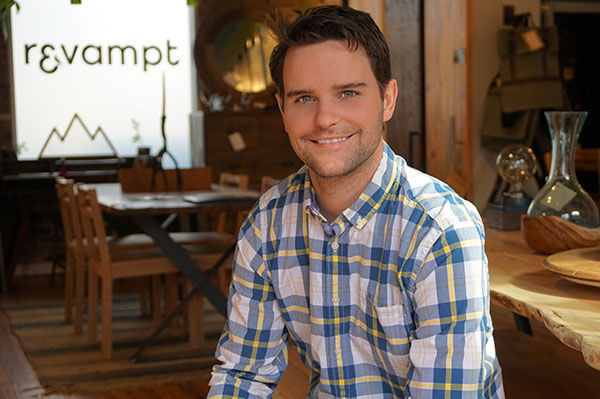 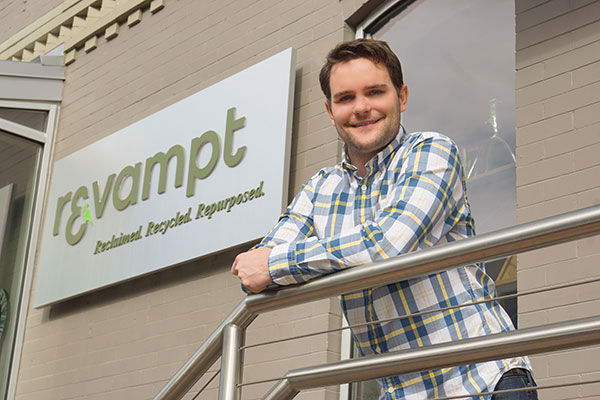 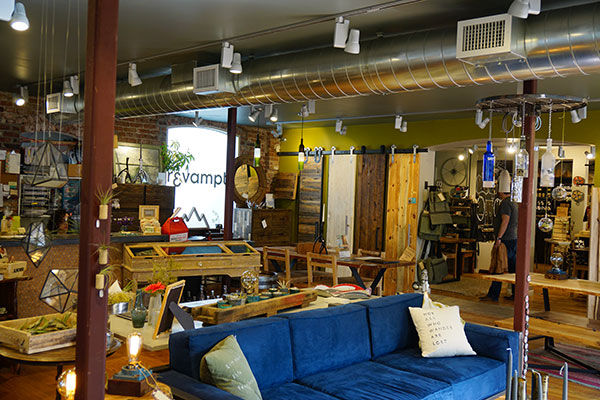 Daniel Louis, owner of Revampt, sees possibility in the most unlikely of objects. He has dedicated his store to celebrating the beauty of reclaimed materials, artfully repurposed in to furniture, decorations, accessories and more. Here he describes how he sources his materials and the ways he is helping future generations appreciate their value.

Tell me about where we’re sitting right now…
This table here is all old Wyoming snow fencing that used to catch the snow drifts, and the frame is made from Colorado beetle kill. People try to replicate this patina by wire brushing, etc., but this piece just naturally has it. It’s naturally beautiful.

You have furniture made from old car hoods, bowling alley lanes, and everything in between. How do you get access to so many cool materials?
We have a widespread network that is growing really quickly. I have some artists that will call me up if they find a cool product. If there’s a lot of it, we may help them buy it. So it’s definitely a network…and knowing where to look. Our salvage guys are always out scouting. They are always trying to get ahold of developers, because a lot of these demolition companies want to get in and demo a building as quickly and efficiently as possible. For them to say, “go ahead and take a couple weeks to salvage what you can,” is not common. So working with them, the City, permitting…it’s one of the challenges about urban salvaging that we deal with often.

Tell me about your logo…
My cousin is a graphic designer in Chicago, and I begged him to help me design something that captured our mission. So the “E” looks like the number three because our tagline is “reclaimed, recycled, repurposed.”

…and your tagline can even be applied to this building, right?
Yeah, we’ve been in this space for 6 years. I read it was originally two old row homes built around 1901. You can see our main door used to be someone’s front door, our windows were also someone’s front door. When I took it over it was a dentist’s office, so we had to clear out a lot and open it up. I hand chiseled that brick over there…and that is why I only have one wall of exposed brick. But we really did try and keep the integrity of the building and its original materials.

How did you get started working with reclaimed products?
After college I went to Utah for an architecture program where I worked on a house on a Navajo reservation. Our house was built for $45,000 and it was 900 square feet. It was pretty impressive. The foundation was composed of old telephone poles and piping, our siding was old palettes and galvanized tin roofing that we had salvaged. It had a cool architectural look, and now a family is actually living there. So working on an entirely reclaimed house was kind of the catalyst to this store. We don’t expect people to live in entirely reclaimed homes, but if you think creatively, you can bring in bits and pieces that have a history and a story. You feel a greater sense of connection to your surroundings.

Revampt also has a relationship with CU Denver’s architecture program?
Yeah, it’s really cool. Each student has to build a completely sustainable piece of furniture as part of this class. They aren’t allowed to put a bad thing on it, so they use things like beeswax and oil as opposed to other finishes. It’s really nice to get an architecture mind working on a smaller piece. They put a lot of time in to their product, and we help sell several of them in our store each year.