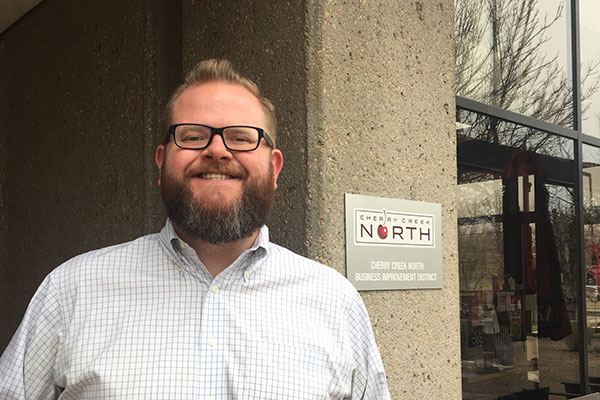 As Director of Economic Development, Brian will oversee the BID's retail efforts in addition to overseeing research and data.  Brian will lead outreach efforts to area property owners, oversee the area's parking and mobility program, and supervise the District's management and business services.

Brian comes to the Cherry Creek North BID from the Downtown Denver Partnership, bringing 10 years of retail strategy and economic development experience. During that time, Brian was instrumental in securing first-to-market retailers in Colorado, including H&M, Uniqlo and Kit & Ace. Brian managed efforts aimed at development of key residential amenities in Downtown Denver, including the establishment of Downtown's first elementary school and the first Downtown locations for Whole Foods and King Soopers.

Brian brings more than 15-years of experience in housing development advocacy and implementation, starting with his work at the Colorado Housing & Finance Authority (CHFA) as an Asset Management Officer in the early 2000's and extends through his time at the Downtown Denver Partnership, where he served on the City of Denver's 2008 and 2012 Mayoral Housing Task Forces.

Brian received his Bachelor's Degree in Marketing from the University of Wisconsin Milwaukee, and earned his Master's of Business Administration in International Business from Regis University.