Capturing every ounce of fluff, each individual whisker and the exact wetness of the nose is David Kennett’s specialty. Four or five days a week throughout most of the year, you can find the man behind BFF Pet Paintings in Starbucks on 3rd Avenue and Columbine Street, meticulously painting pets while customers waiting for their lattes look over his shoulder. 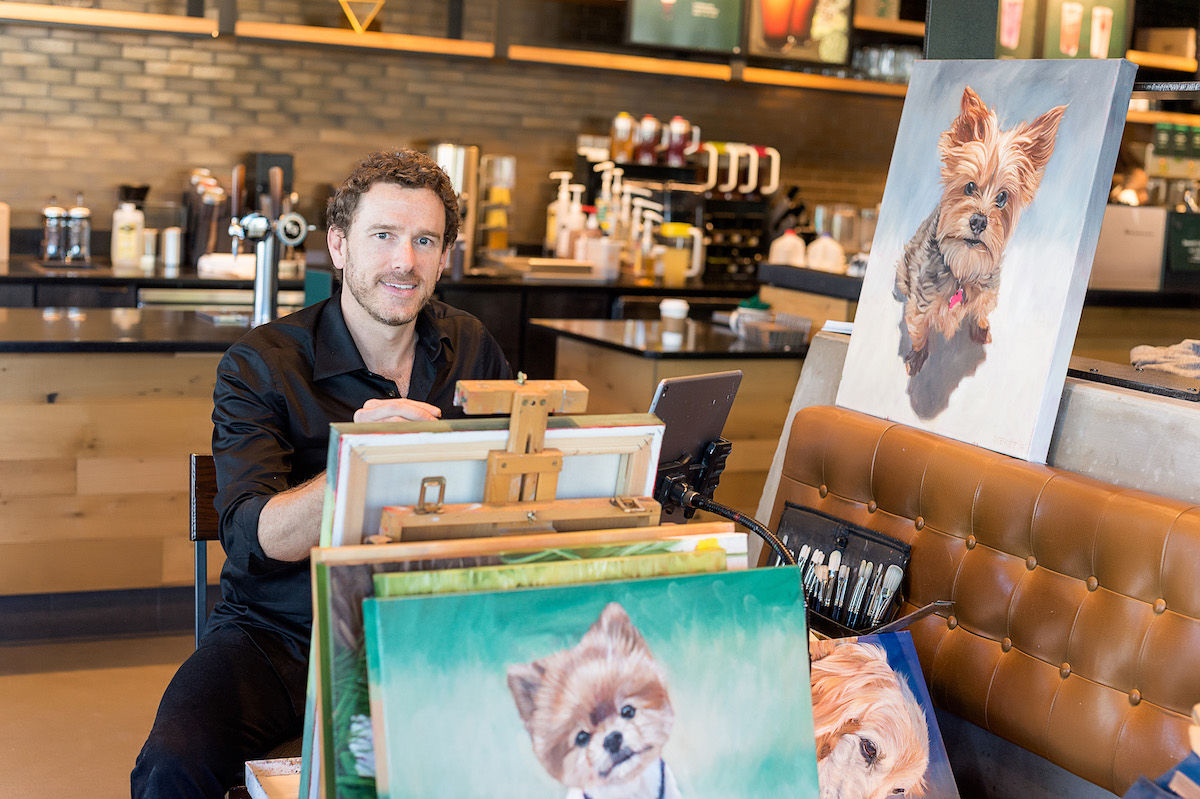 While he splits his time between Denver, Breckenridge and the Bay Area, David Kennett can be found painting man's best friend most days of the week in a Cherry Creek North coffee shop.

As a boy, Kennett was always winning school coloring contests; prompting his parents to put him in painting classes at age 7. He learned watercolor painting and pencil drawing skills for the next nine years, then went on to pursue a Bachelor of Science in Art from San Diego State University.

But it wasn’t all landscapes and portraiture—or, as he likes to say, “cats, dogs, horses and grandkids”—from then on out. While he painted full-time for a couple of years after college, successfully doing shows and selling plenty of work, he found it depressing to paint all alone at home.

“I realized I’d never tried anything else,” he says. “I thought, maybe I’m an engineer or a finance guy? I don’t know what I am.”

He went back to school and settled on architecture, earning his graduate degree from the University of Colorado in the field and then obtaining an MBA with an emphasis in real estate development.

“But I finished in 2007, which was the worst time in the world to get into that,” he says.

He did some sustainable building consultation work, but it was slow, so he tried his hand at another career: sales. It was tough, and he didn’t much believe in the products he was selling. But while he was busy knocking on doors, his then-girlfriend asked him to paint her dog.

“I hadn’t really been painting for several years,” he admits. “I was like, ‘Wow, that was fun. What a great idea!’ I was so optimistic that it was the best idea ever that I’d walk up to people on the bike path and show them a picture on my phone of the one painting I’d done and write down my information on a piece of paper. I didn’t even have business cards yet. But I was like, ‘Everybody’s gonna love this!’” 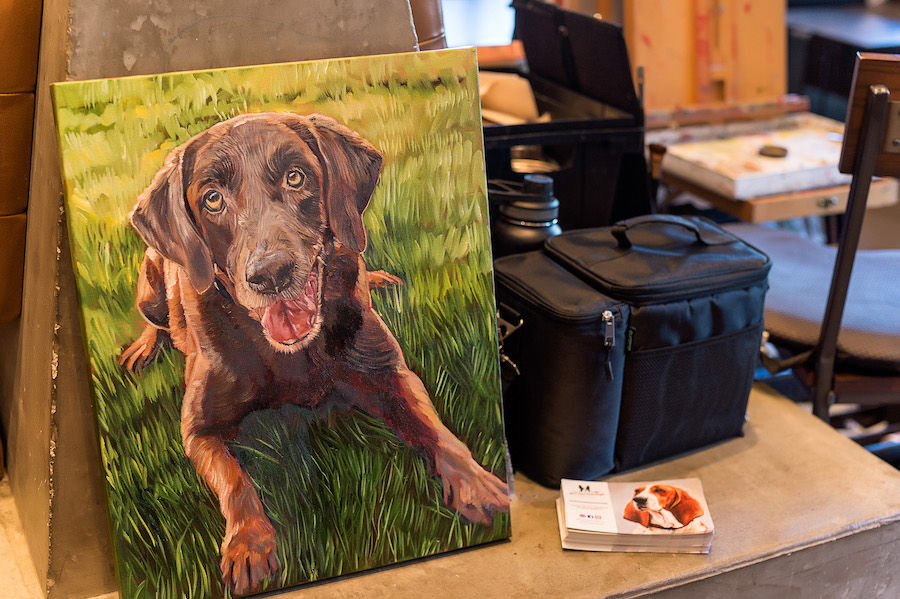 David Kennett typically leaves a couple examples of his work and business cards at the coffee shop, should anyone be interested in commissioning their own portrait of their best furry friend.

Finally, he had a product he could believe in with BFF Pet Paintings.

As he was considering how to paint full-time in 2012, he learned his mother had Stage 4 breast cancer. He quit his job so he could be more available to visit her in California and began spending the days he had in Denver painting in Washington Park.

“In my first year, I figured if I could double what I’d made just doing it on the side, then that would be a start. But then I made five times that the first year.”

Kennett began painting at nearby businesses for the next three years, never quite finding the right fit of accessibility, high foot traffic or a sense of community.

“I was racking my brain and didn’t know where to paint to get business. When I thought of Starbucks, I drove everywhere around the metro area looking to see if there was a spot where I could fit. Is it busy? Is it a nice part of town? Some wouldn’t let me paint there, some there was just no room.”

The 3rd & Columbine location, which he began painting at a little over two years ago, fit the bill perfectly.

“I’ve kind of settled in here,” he says. “I kind of sit in the same spot every day. I try to not hover over people if they’re already there, since I feel like I don’t have a right to do that. But some people know me and they’ll be like, ‘Oh, I’ll move.’” 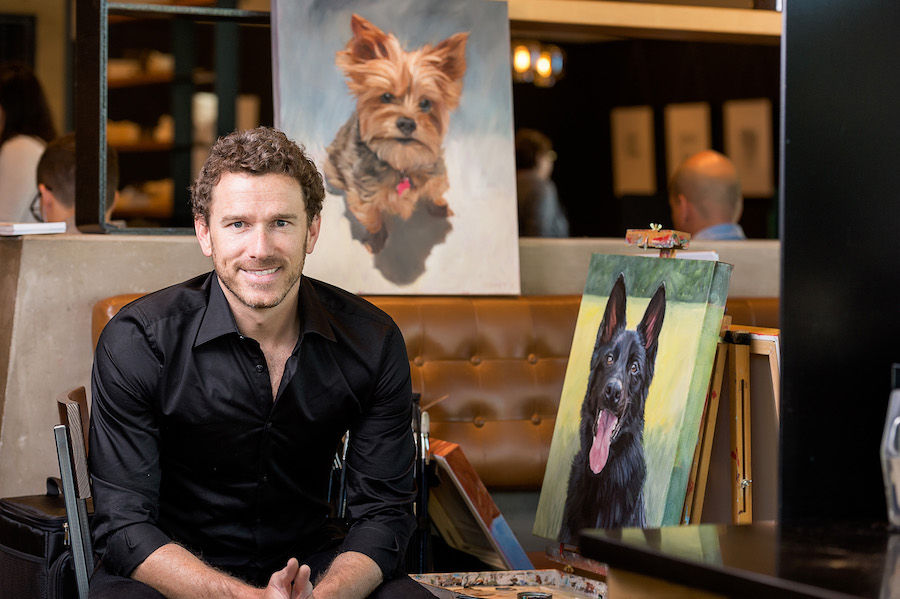 As an artist, David Kennett loves getting out and meeting the community while he paints people's pets.

He’s gotten to know all the employees and regulars, making friends along the way.

“It’s so much more fulfilling,” he says. “I couldn’t do it if I had to sit at home and paint, and not to mention it’s a way of getting exposure… They’ve let me keep a couple of paintings there when I’m not with some cards.”

“I feel like I like the sense of community," he says. "It makes it possible for me to paint, or else I’d go crazy.”

Kennett’s process is usually the same, no matter the mammal.

“Usually they’ll email me a few pictures, and I’ll tell them which ones I think work best for a painting. Sometimes I’ll meet with people and do a little photoshoot if necessary, but now most people are pretty good with photos now on their iPhones. It takes somewhere around two to 12 weeks, depending on how busy I am.”

And while he mostly paints dogs, he’s up for the challenge of any pet—or person—you throw his way.

“I once did a baby raccoon that somebody was nursing back to health,” he says. “I’ve done some guinea pigs and rabbits. Other than that, mostly horses, cats and dogs. I paint kids and families, too.”