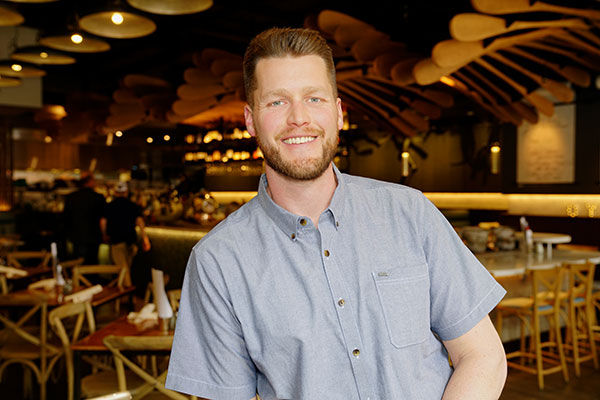 A casual New England vibe hits you when you cross the threshold of Blue Island Seafood & Oyster Bar…and it is very much intentional, according to Owner, Sean Huggard. We spoke with him about his partnership with a Long Island shellfish farm, the art of oyster harvesting, providing dish-to-dock service in a landlock state and much more.

Where did your passion for seafood come from?

What is the “dish to dock” process like when your restaurant is located in a landlock state, like Colorado?

Sean: It all goes back to our relationships on the coasts and being able to bring that to Denver. One of my partners, Chris Quartuccio, is an oyster farmer in Long Island, so we have our own farm up there which you can see on the map on our wall. We get a lot of our clams from the Great South Bay. So, having that as a key component of the ownership group pushes more influence in how we source our seafood. We've also had quite a few staff members go out to the farm.

What is your oyster harvesting process like? How long does it take to seed, grow and ship an oyster off to your restaurant?

Sean: An oyster you're eating in this oyster bar today is probably two and a half to three years old, by the time it goes to harvest. In the Northeast, places like Massachusetts, there's an oyster blue law, which says an oyster has to be three inches before you can sell it. They grow about an inch a year. So, there is a lot of handling. Oyster farmers are out there cleaning cages, fighting off crabs, rotating oysters, and putting them through these giant tumblers. They tumble the oysters to grate the outside of the shells, because the oysters would grow really long if just left in the wild. Oysters grow like trees do, in layers, with calcium deposits.  If you tumble them, they grow outward, and as you break the tip of the shells off, they start to grow down and get a deeper cup, allowing the oyster to get more plump. From the farm, they get cleaned, grated, sized, bagged, tagged and then they hit an airplane.

From the point your oysters hit an airplane to the point they sit on a plate in front of me, how long is that?

I’m reading through your oyster menu, and I can’t help but wonder how some of your oysters get their names….like “The Naked Cowboy?”

Sean: Usually, the name has to do with the owner of the farms, like Raspberry Point, Blue Point, Smith's Point. Now the Naked Cowboy, which is one of our oyster brands that Chris owns, that’s a bit of a different story. Chris and his dive team stumbled upon a wild oyster reef, which almost shouldn't exist because oysters in New York went pretty much extinct. So, for them to stumble upon so many wild oysters is really cool. Chris is as “New York” as they come, he’s very prideful and he wanted to name them in a way that would stand out to a New Yorker on a menu. The actual Naked Cowboy is the guy who plays guitar in his underwear in Times Square. He’s been there for twenty-something years. We had to license the name from him, because that's his trade name. He's very well known in New York.

Aside from your oysters, what else is your restaurant known for?

Sean: We are, without a doubt, a seafood restaurant, not just an oyster bar. We focus on really traditional New England seafood. The lobster roll and clam chowder are probably some of our most popular items.

I am curious why you chose Cherry Creek North for the location for Blue Island Oyster. You have a lot of options for great locations for restaurants.

Sean: We were targeting a very specific demographic and also wanted high density of both residential and business. A high walking score was important to us. We wanted people out and about on the streets to drop in.

What do YOU order if you’re going to dine in your restaurant?

Sean: Always the clam chowder. Always oysters. The Naked Cowboys are usually my favorite. They're about 3 1/2'-4" super briny oyster…

…Do you eat your oysters plain, or do you put all sorts of stuff on them?

Sean: Usually plain, but I like to mix it up a bit. The shuckers make great mignonettes here, which is a vinegar-based sauce. I think I saw someone making a kiwi apple one earlier today. So, they're always trying cool ideas. I usually order off the fresh fish list too.

I was looking at your website and I saw you guys also offer oyster shucking classes?

Sean: We do, twice a month.  It's called the “Chef and the Shucker.” So, you get the chef and the shucker in front of you at the oyster bar, and you learn how to shuck oysters. We talk about how you make mignonettes, how to make oyster sauce. We also do what's called “Shuckers for Hire.” We do off-site catering, lobster boils, etc.

I have to ask about the wooden structure floating over your bar area. It reminds me a bit of a whale skeleton.

Sean: We usually get fish skeleton, whale skeleton, oars from a boat. What that really represents is the movement of water. The movement of water is very calm and refreshing to people. When I was meeting with the designer I said I wanted people to come in and exhale the way you do when you get to the beach. I wanted that sense of, “I have arrived, I am here.” It’s that feeling I get when I'm going across the bridge to Cape Cod, or I land in Nantucket, or I get to the beach in San Diego. This place is about letting loose a little bit and experiencing something in your daily life that's not so “daily.”